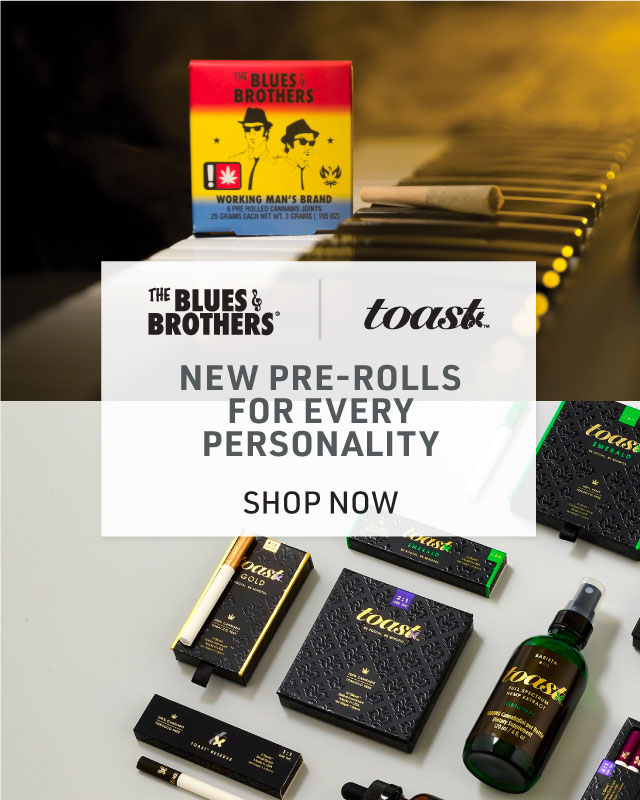 TGS and Toast Premium Products are teaming up to bring you Slices: high-quality and high-value pre-rolls, priced right and up to Toast and TGS award-winning quality standards. All pre-rolls are made using Toast's signature process for the most discreet and pure experience.

Toast Classic Slices are strain-specific and available in .5-gram and 1-gram options. 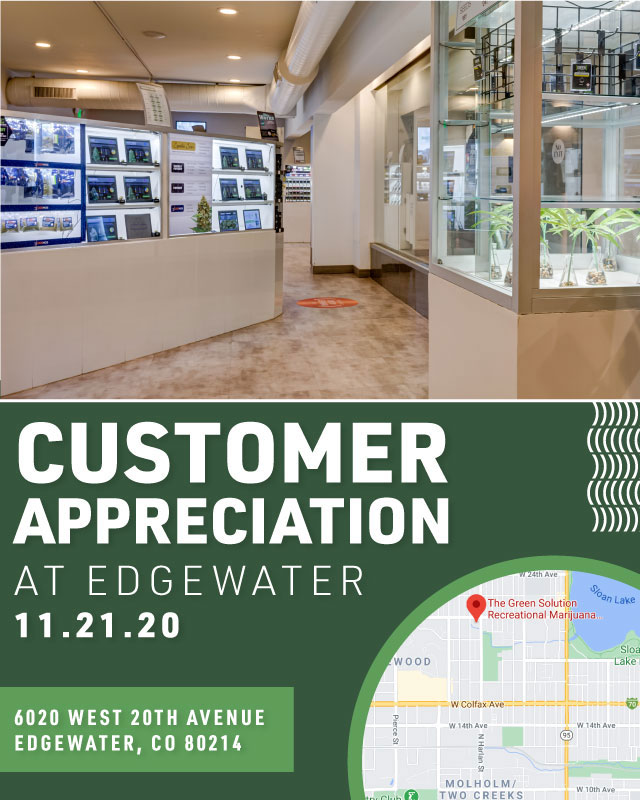 TGS has partnered with legendary performer Jim Belushi and his Oregon-based cannabis company, Belushi's Farm, to debut The Blues Brothers® pre-rolls in Colorado. The pre-rolls will be available at select TGS locations across the state starting on Saturday, October 24.

Named after the band, legendary movie and 'Saturday Night Live' characters made famous by Jim's late brother, John Belushi, and Dan Aykroyd, The Blues Brothers pre-rolls were introduced last year in Oregon. The pre-rolls will be available in packages of six .25-gram pre-rolls and five .7-gram pre-rolls, as well as a single one-gram pre-roll, to be rolled out across select TGS locations. The first TGS locations to carry The Blues Brothers® pre-rolls will include: 470 Malley Drive in Northglenn; 4400 Grape St. and 995 Wewatta St. in Denver; 3179 South Peoria Ct. in Aurora; and 4151 East Kentucky Ave. in Glendale.

'Belushi's Farm can't wait to enter into the great cannabis state of Colorado. It will be our first statewide partnership outside of our flagship farm in Oregon', said Jim Belushi. 'The Green Solution is the top cultivator in Colorado and their mission of healing falls right smack in line with the Blues Brothers' belief in the power of cannabis: music, mischievousness and, as they say in the movie, a Mission from God. We will be bringing our mission, our harmonicas, and the original Blues Brothers music to the stages of Colorado soon. Let's all celebrate' said Belushi.

Jim's work in cannabis is being documented now on 'Growing Belushi', a new series showcasing his Oregon cannabis farm and operations on The Discovery Channel, in partnership with Live Nation. Recognized for his starring roles as an actor, musician, director and cast member with 'Saturday Night Live', 'According to Jim' and 'The Principal', Belushi's Farm currently offers three signature brands, including Belushi's Secret Stash, Captain Jack's and The Blues Brothers.

'In addition to his comic and music talents, Jim Belushi has developed an exceptional cannabis product through Belushi's Farm and we couldn't be more excited about being the first to welcome them to Colorado,' said Kyle Speidell, co-founder and co-president of TGS. 'Jim is a skilled cannabis producer and is involved in everything from farming to production. This isn't just a celebrity-endorsed brand. He is also a passionate supporter of veterans' causes, which, as a veteran-owned company, is something that aligns with The Green Solution.'

Having suffered the loss of his brother, John, to an overdose, as well as having experienced his own journey of learning and healing with cannabis, Jim is an advocate for the positive medical benefits of cannabis, including pain management and improving quality of life. He also endeavors to heal the harms of the War on Drugs, serving as an advisor to Last Prisoner Project, a coalition of cannabis industry leaders, executives and artists dedicated to releasing cannabis prisoners and helping them rebuild their lives. TGS has also supported the Last Prisoner Project in the fight against racial disparity in cannabis incarcerations.

What began as a meager 43 plants during Oregon's medical marijuana program in 2015, today Belushi's Farm encompasses a sprawling and spiritual 93 acres along the Rogue River, playing home to a range of offerings-from Belushi's Secret Stash, to The Blues Brothers, to Captain Jack's Gulzar Afghanica, a rare strain from the Hindu Kush region that became known in the '70s as 'The Smell of SNL', and now GROWING BELUSHI, an all-new series on The Discovery Channel. GROWING BELUSHI takes Discovery's audiences inside Jim's world and shows the incredible effort it takes to build a legal cannabis operation. Having suffered the loss of his brother John to an overdose, and his own journey learning and healing through cultivating cannabis, the farm's proprietor, performer Jim Belushi, is a proponent of the plant's beneficial properties across a spectrum of uses. From enhancing joy and quality of life, mitigating trauma and managing pain, to a harm reduction approach and rebuttal of the opioid abuse epidemic, Jim advocates for patient rights and adult-use legalization while empowering newcomers to access the profound spiritual and healing powers of quality cannabis.

This TGS Hemp-Wrapped Blunt contains high-quality cannabis wrapped in a natural, dried hemp-leaf blunt wrapper. It's the classic blunt style you know and love in a perfectly portioned package. Available in .95 or 2 gram options. 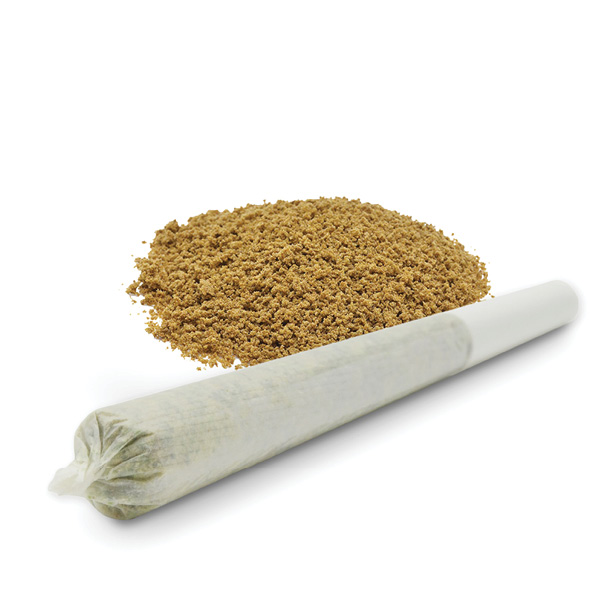 This 1.2-gram pre-roll cone is an upgrade to our Regular Cone, featuring a bonus hash infusion for that extra kick. Available in strain-specific options.

This TGS Hemp-Wrapped Blunt contains high-quality cannabis wrapped in a natural, dried hemp-leaf blunt wrapper. It's the classic blunt style you know and love in a perfectly portioned package. Available in .95 or 2 gram options. 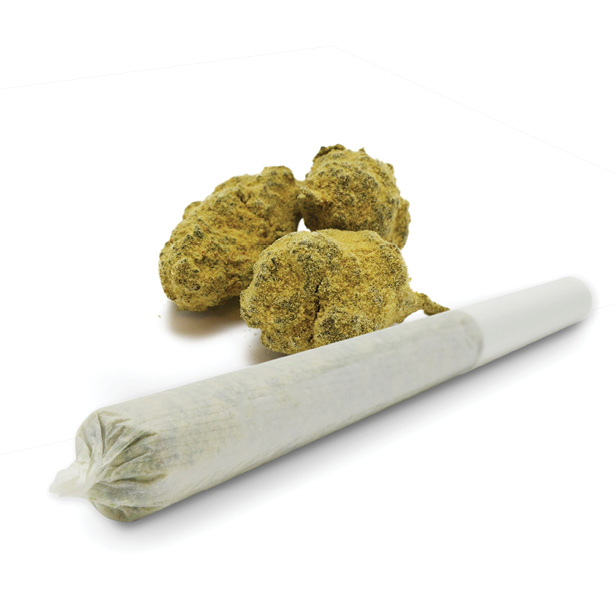 The Caviar Cone (1.9g total) consists of .95g of premium TGS flower soaked in .2g of Hash Oil and coated in .25g of Trichomes for an impressively potent pre-roll that takes you and your friends higher.