Wait, Where is Marijuana Legal Now? A Roundup 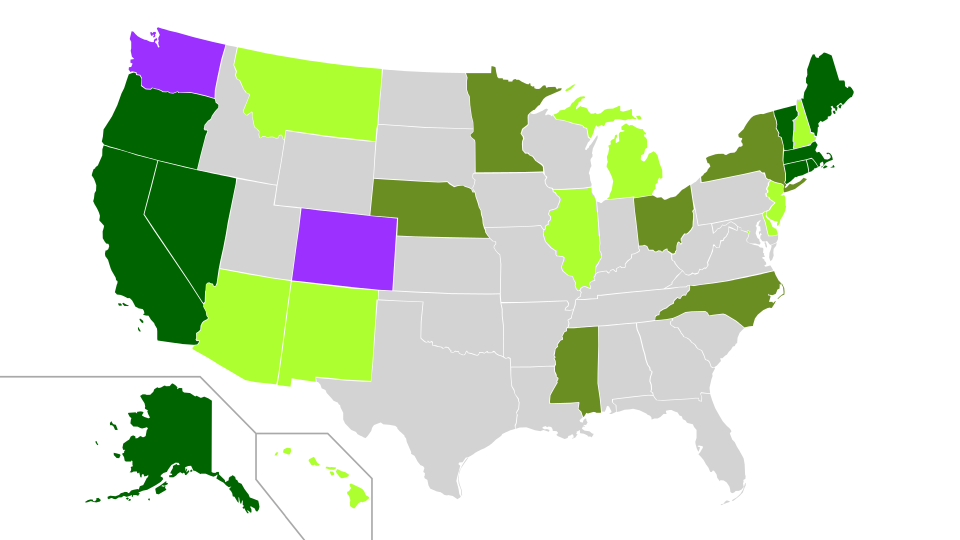 Marijuana is a Federally Illegal Schedule I drug. So, how is it possible marijuana is legal in some states? The Tenth Amendment creates “the division of power between the Federal government and state governments.” Proposed and ratified with the Bill of Rights on December 15th, 1791, thank you to the 1st United States Congress, for making it possible for the people to decide whether Marijuana is legal in their state 200+ years later. Many states from the east coast to the west coast are voting for legalizing marijuana incrementally. It’s hard to keep up with where marijuana is legal and in what capacity, so here is the breakdown.

States with Prohibited Marijuana Use

14 states have legalized only CBD for medicinal purposes and have varying THC percentage limitations. All states on the list below except Mississippi and North Carolina have NOT decriminalized any amounts of THC containing marijuana.

23 states have legalized the use of marijuana for medicinal purposes with no limits on THC.

Of the 23, the following 12 have decriminalized possession in small amounts as well.

There are 10 states, with one (Illinois, pending the governor’s signature) on the way in 2020. Each state has their own laws regarding transport and cultivation laws. For simplicity, I’ll share transport amounts.
The following 8 states can transport up to 1 ounce of Marijuana:

The following 2 states can transport up to 2.5 ounces of Marijuana:

The incremental progression of legalized marijuana typically begins with medicinal legalization with limited THC, moving up to medicinal legalization without THC limits, possession decriminalization, and finally to full recreational legalization. Which state will level up next? Here in Colorado, The Green Solution is proud in one of the first states to legalize recreational use of marijuana, and pretty stylishly, we might add. Check out our huge selection ofconcentrates,flower,edibles, and much more atMyGreenSolutionand reserve for pickup at yourpreferred location.